About two and a half hours north of Lima lies the Huara Province of Peru, birthplace to Aniceto Salazar. Born April 16 in Sayán (shown on the map above as the red marker). According to La Cumbia de Mis Viejos (LCDMV), Aniceto got his start in the music business like so many others when Enrique Delgado and the Destellos came to town. It’s really remarkable the blast radius Los Destellos set off in Peru to generate such a great wave of new music. In Salazar’s case Los Destellos were invited to play at the opening of a store owned in Sayán by a Japanese woman that knew Aniceto. The woman recommended to Enrique that Aniceto accompany them on stage, and he accepted. While Salazar likely enjoyed such limelight, he ultimately remained focused on his education.

Aniceto sought admission to the National University of San Marcos to study accounting, but he was denied entry. That may be all the better for cumbia fans, as this led Aniceto to pursue his musical talents full time. He started out by playing in various local groups focusing on tropical sounds, before a promoter gave him his first opportunity to lay a single down for Polydor likely around 1970. Aniceto’s guitar tone and style always seem to be more rock leaning, with frantic solos often ending a track as it fades out. A pioneer in the distorted guitar sound in cumbia, making his cuts all the more desirable in my opinion. It’s a shame he never released a full LP. 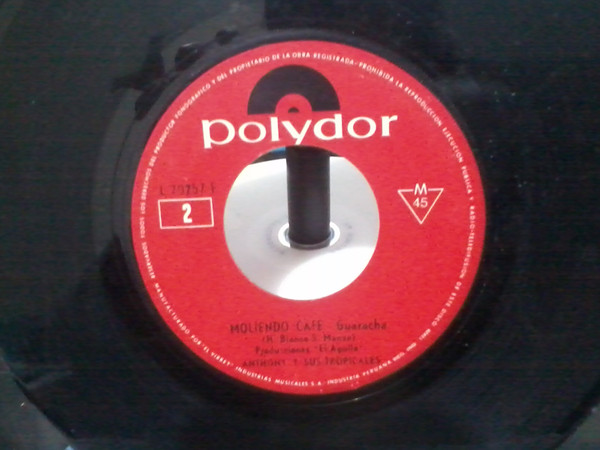 Notably this first single was released under the moniker “Anthony Y Sus Tropicales” with Aniceto having composed the A-side cut “Descarga Tropical.” The B side contains a nice fuzz-guitar cover of Hugo Blanco’s latin standard “Moliendo Cafe.” It was after this release that Aniceto sought to form his own band, liking the name “Los Fabulosos” he was counseled that since a group named “Los Fabulosos De Ritmo” already existed, that he should modify it somehow, and “Aniceto Y Sus Fabulosos” were born. Note above, that as credited on the Polydor release, production was by “El Aguila.”

According to LCDMV & Sótano Beat, this individual — El Aguila — was a promoter by the last name Aguilar. Mr. Aguilar oversaw the early stage of Aniceto’s professional career and led to further 45 RPM cuts for Disco Ramirez and Virrey labels (two 45s and one, respectively). That was until Alberto Maravi came to visit Aniceto. Still at DINSA met with Salazar to try to lure him to record for DINSA, Salazar recalled that while he didn’t drive as flashy of a care as Senor Aguilar, DINSA pressed vinyl in a kalediscope of colors, and this was enough for him to change his recording affiliations. Maravi’s courting was a success and Aniceto would cut at least 10 singles for the DINSA label. The two are shown together below. 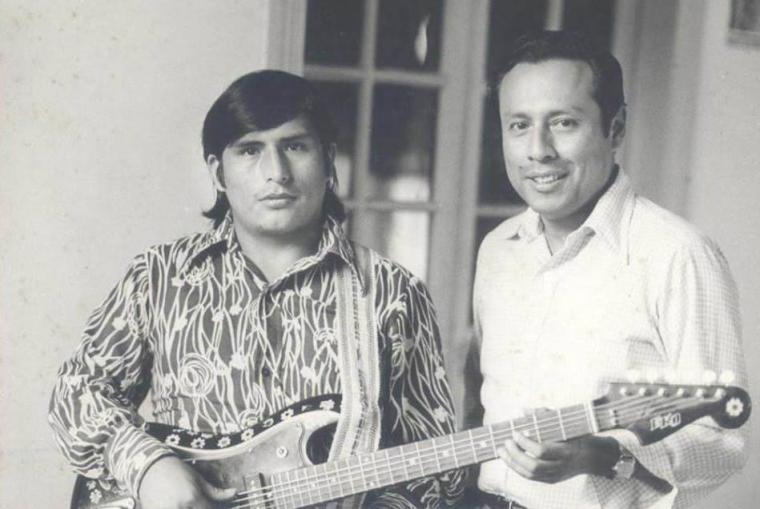 As documented elsewhere on this blog, Alberto Maravi would ultimately leave DINSA to form the INFOPESA label, he brought many of the artists he developed, and Salazar was no exception. Aniceto also released a number of singles under various monikers including “Loretano Y Su Combo” and “Los Tahuamperos” his characteristic rock-leaning guitar gives away the true artist every time.Shown below is Salazar with one of the ubiquitous cover models for the DINSA series Hit Parade Tropical.

Aniceto is still touring with his group today and is active on Facebook. He’s even still penning new tunes, as evidenced by a Chichaweb article. I haven’t heard the tunes yet and would love to know if they still sound like his golden-era tunes.