Led by the one-and-only Enrique Delgado Montes, Los Destellos are largely recognized as the founding-fathers (with EnDeMo the definitive father) of Peruvian guitar-driven cumbia. Both the man and the band serve as important bedrocks of Peruvian cumbia, so first we’ll learn a bit about Enrique before delving into the Destellos.

Born in 1939, EnDeMo was a musical prodigy. At the age of 11 he was admitted to the Peruvian national Musical Conservatory. At 13 (!) he was under contract to play lead guitar for Criolla artists in Peru. After touring around with these groups and others, playing diverse genres of music, and rumored to have been disowned by his father for pursuing a career as a professional musician, he would go on to form Los Destellos. Urban legend in Peru states that just prior to forming Los Destellos, Enrique unsuccessfully attempted to join the rock band The Black Boys (later renamed Los Cuervos). Just before doing that though, in the mid-1960’s Enrique released a couple of nuvea ola/ “surf” type singles for SONO RADIO that signaled his transition from his criolla past towards a newer, more modern sound. I’m aware of the transitional pre-Destellos singles of SONO RADIO 12316 (A: Mentias (guaracha)/B: Asi Te Quiero (Bolero)) released under the banner “Enrique Delgado Y Sus Hits,” as well as another under the moniker “Enrique Delgado Y Sus Amigos.” (SONO RADIO 12387; A-side: Espero Una Carta/B-side shown below). 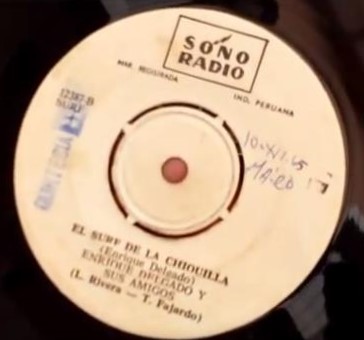 Ready to attempt his idea at a new sound Enrique sought out to form his new group around 1966. He knew Humberto “Tito” Caycho from his youth, as Tito also played guitar in criolla bands. Carlos Ramírez Bazo (also seen spelled Vaso) was an old friend of Enrique who had played percussion in various military bands. Fernando Quiroz was introduced to Enrique by a journalist after his band Los Zany’s failed. More in the rock category than tropical/criolla, legend has it that Quiroz was less than enthusiastic about such a genre change; however, once he heard Don Delgado play, he knew he wanted in. It’s believed that the first album’s percussion is actually that of studio extras. On the self-titled debut all songs are credited to Enrique.

I will eventually start to post album reviews, but what I will say about the music for now is that it is an innovative mix of old and new (for the ’60s) sounds. While starting out exclusively as an instrumental group, vocalists were eventually folded in for a few tracks here and there on the latter albums. At some point the group started recording under a pseudonym “Los Casmenos” on Rey Records. This was likely due to contractual obligations which prevented them from recording under the Los Destellos name. They recoreded a few latin standards on this label, as well as rerecording some of Los Destellos songs. You’ll see Enrique credited often as EnDeMo on these Rey Records releases (perhaps to obscure the contractual issue?).

Of the three core members, sadly Enrique died ahead of his time in March of 1996 at the age of 57, survived by his spouse who continued the band under her name. Tito  Caycho died February 1, 2016 at the age of 84 in Iquitos. It is believed that Fernando is still alive, reports of him pulling a gun and robbing his daughter (!) surfaced in Peruvian media in June of 2015.