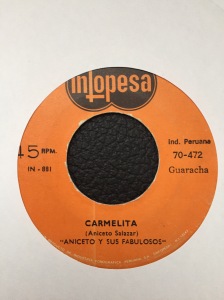 Beginning out with an almost “hit-the-road-jack” intro the song builds to it’s actual theme which invokes Andean scales and rings of a Peruvian cumbia in perhaps the truest embodiment. This makes sense, as it is one of the first (only?) releases Aniceto cut for Infopesa after Alberto Maravi moved his artists he had signed to DINSA to his new label (Infopesa focused primarily on indigenous sounds). Negrita Mia is a vocal tune, if you’re a purest for instrumental cumbias like me, this will detract from the desirability of this 45, and again I think this may have something to do with the change over to Infopesa. It’s not a bad song, and has some nice guitar work, but is not personally what I’m after.